Bill Allenbaugh, an active-retired member of Baltimore County, MD Local 1311 and a 36-year veteran fire fighter, is now living and working as a probationary fire fighter in Lexington, South Carolina.

As a career fire fighter and captain in his department, Allenbaugh struggled with administrative burnout, post-traumatic stress disorder (PTSD) and depression, which only got worse after retiring in 2018. He started drinking more frequently, sleeping all day, and feeling depressed and having outbursts of anger. As he became more withdrawn, he knew it was time to take back control of his life and seek treatment at the IAFF Center of Excellence for Behavioral Health Treatment and Recovery. To be closer to his son, Allenbaugh moved to South Carolina, away from everything he knew. Around that same time, one of his best friends died and that’s when his mental health really deteriorated. “I didn’t want to hurt myself, but I also didn’t care if I woke up the next day,” he says. “My wife and kids were all telling me to get help.”

After entering treatment at the Center of Excellence, Allenbaugh learned to look at himself and his problems differently. “By allowing myself to feel the way I did, I realized it was okay to feel what I was feeling.”

He says being in treatment with other IAFF members – including retired members like him — who were experiencing very similar issues was some of the best therapy. He adds, “The counselors at the Center had a very good understanding of how we as fire fighters process issues and the culture in the fire service.”

Now when he talks to his brothers and sisters who are getting ready to retire, he tells them how difficult the transition can be, especially if they’ve dedicated many years and loved the job like he did. “Many of my fellow brothers and sisters have had issues when they retired, but they didn’t talk about it,” he says.

After graduating from the Center of Excellence, Allenbaugh is more aware of how he feels. He can sense when his anxiety is building before it gets to be a problem. “If there is something going on that starts to get big, I have the tools to bring myself back down to a more manageable level.”

He also continues to meet with counselors and his primary care doctor to help stay healthy, both physically and mentally. “Life still feels upside down sometimes,” he says.

Having the support of his friends and family has been important to his continued recovery. In addition, he stays connected with his new brothers and sisters “who walked with me at the Center of Excellence during my journey.” He checks up on them and has even visited a few. “I formed lasting friendships that I take to heart,” he says. 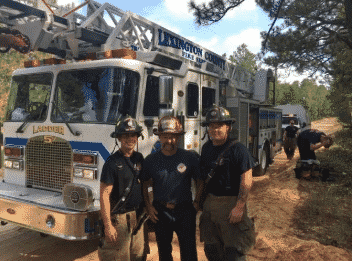 His message to fire fighters who are reluctant to seek help for fear they’ll be judged by others is, “You are not alone in your struggles.”

He admits he was ashamed to get help, even though he preached about the importance of taking care of your mental health for 10 years while serving on his department’s peer support team. “When I told people, they were surprised that I was struggling,” he says. “But even better, they were very supportive and happy that I sought out help. I now tell my story to teach the next generation. I tell them, “It’s okay to get help. Many of us struggle for years before getting help. You will be amazed how many of us have issues but are still able to live better and more enjoyable lives.”

Below, Allenbaugh is featured with his wife. The couple recently purchased a property in South Carolina with plans to build a new home. 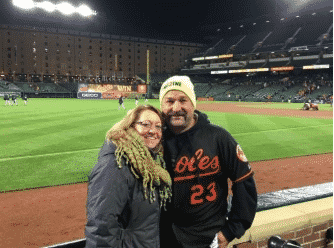 If you are an IAFF member and interested in sharing your story of recovery from PTSD, addiction or another behavioral health problem, contact IAFF Behavioral Bealth Specialist Lauren Kosc, LCPC at [email protected].