Changing the Laws to Change the Culture

The symptoms of post-traumatic stress disorder (PTSD) may vary from case to case. While treatment options have grown significantly in recent years, many fire fighters may not want to admit they’re having trouble managing their grief.

The recognition of PTS and PTSD, particularly among fire fighters and EMS personnel, rose in the aftermath of September 11. According to the Health Department’s World Trade Center Health Registry, PTSD is one of the most common health effects of the September 11 terrorist attacks. Symptoms of PTSD are experienced by up to 20 percent of adults affected by the attacks. Despite experiencing trauma, fire fighters continued to do their jobs and the traumatic experiences continued to compile.

The Impact of PTSD on Florida Fire Fighters

After the Pulse nightclub attack in Orlando, Florida, on June 12, 2016, some fire fighters and EMS personnel were unable to return to work due to PTSD and related behavioral health problems. At least three professionals who responded to the incident have come forward publicly with a diagnosis of PTSD.

At the time of the Pulse attack, Florida fire fighters could receive medical coverage through workers’ compensation if diagnosed with PTSD due to an event while on the job — but they were not permitted lost wages.

With the increase in PTSD among fire service members after the Pulse nightclub shooting, legislation was introduced but failed to pass. After the Parkland shooting, the bill was revisited, passed and finally signed on March 29, 2018, by the Florida governor at the time, Rick Scott. The legislation states that workers’ compensation will cover claims for PTSD medical coverage, as well as the loss of wages. The new policy was effective on October 1, 2018.

The changing laws, which include more benefits and facilitate lost wages for fire fighters and other first responders, demonstrate how the fire service culture is changing the perception of mental health. Because of the awareness and programs implemented by the fire service, governments are recognizing that PTSD and other mental health conditions are serious diseases and need to be treated as such. 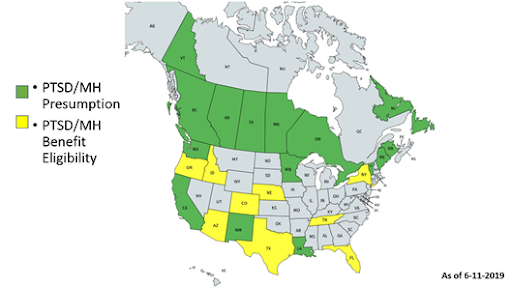 If you or someone you know struggles with PTSD or addiction, help can’t wait. You’re not alone, and there are people who can help. Call the IAFF Center of Excellence to speak with a representative who can help you find treatment. The IAFF Center of Excellence was specifically created for fire fighters, by fire fighters. The professional staff understands the fire service and designs treatment programs exclusively for IAFF members. Call now to get the help you need.